LabLearner has been in use in some 30+ states for nearly two decades. While this provides a rich archive of experience, it also presents assessment issues shared with every other educational program. This is because, not only do state science education assessments differ from one state to another, but also the assessments themselves change within any one state from time to time – often too frequently. It is therefore difficult to make clear, scientific assessments over time or between locations. This fluidity of assessments creates significant challenges in nearly all aspects of basic PreK-12 education, not just science and mathematics. Fortunately, there is no comparable circumstance in professional science and medicine. Imagine, for example, a situation where the determination of individual cholesterol levels was dependent on geographic location or time. Frequently changing tests of cholesterol levels would make it very difficult or impossible to compare one laboratory test result to another. This situation would be devastating, particularly when wishing to determine the efficacy of a treatment or medication. Unfortunately, frequent changes in assessment and local variance in assessment protocols is the rule in basic education.

From a science content perspective, LabLearner is very well aligned with the Next Generation Science Standards (NGSS). This, in turn, results in excellent LabLearner alignment with most state science education standards since NGSS has been extensively used as a model for state standardized science tests.

Even though standardized science education tests may dictate the content of science curricula, most educators and neurocognitive researchers agree that science should primarily be taught in a hands-on, experiential fashion. This is where LabLearner truly excels. Not only do LabLearner students get complete NGSS-aligned science content, but they also outshine other students in the acquisition and proficiency of science skills and problem-solving practices.
Given the caveats and cautions intrinsic to all academic assessments discussed above, LabLearner students nonetheless achieve excellent results by a wide variety of measurements. Some of these assessments are discussed below. 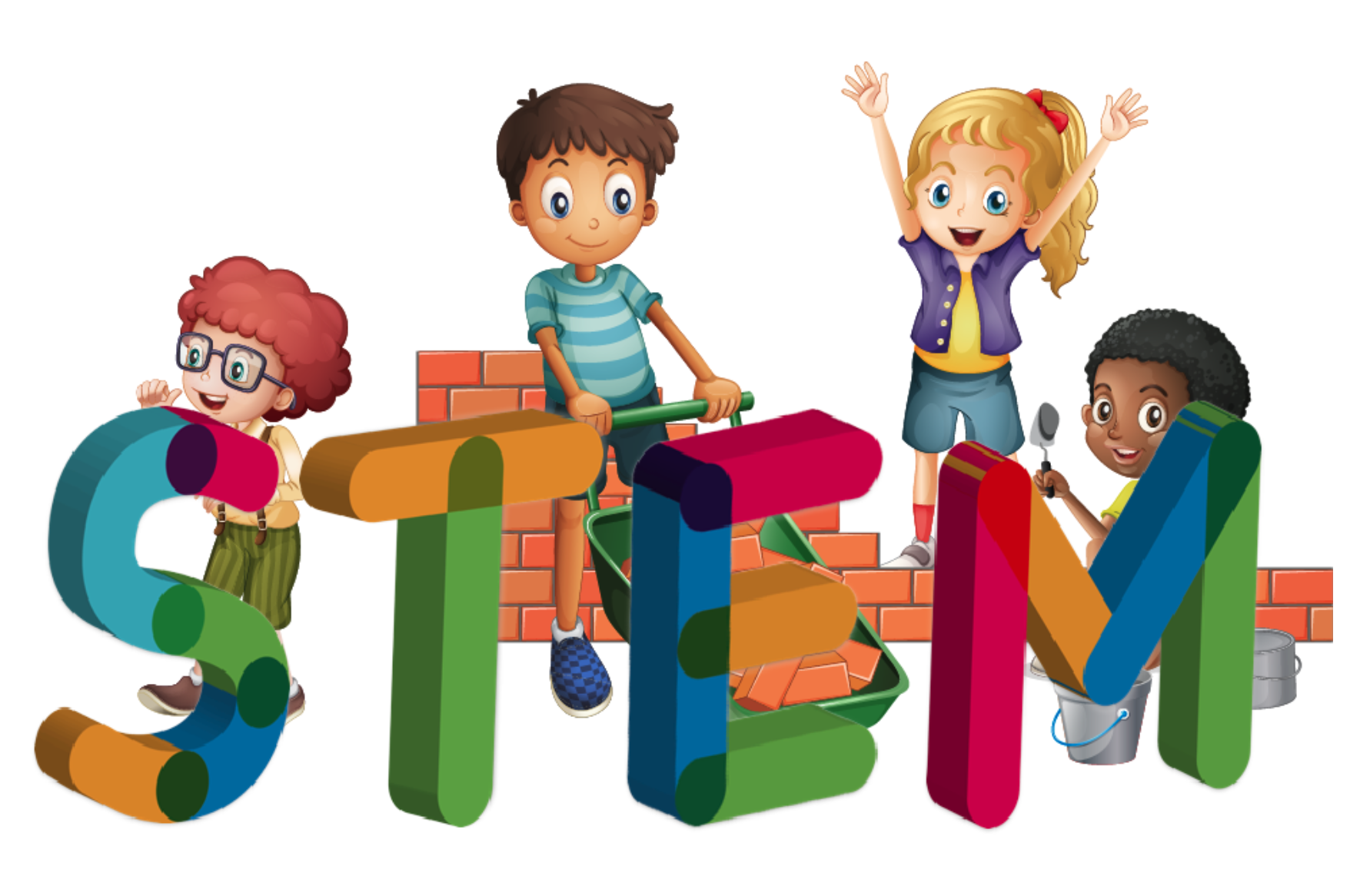 the development of critical thinking, problem-solving, numeracy, fine motor control, oral language, and literacy skills in preschool children. Two areas of impact were evaluated – receptive and expressive science tool vocabulary, and science concept comprehension. A total of 100 matched cases of preschool children aged 3.5 and 5.5 years were included in the study.

Results showed that children’s receptive and expressive science vocabulary increased over time and that these gains were statistically significant (p< 0.05). With regards to science concept comprehension, the study centered on the question of whether children would be able to grasp (and be able to articulate or otherwise demonstrate) an understanding of the most important concepts contained within selected LabLearner activities. The completed study showed that for the majority of the science activities, children were able to demonstrate an understanding of the central scientific concept, either using language, or appropriate behaviors.

There is a large variety of standardized tests that U.S. public and private schools use to assess students in science. LabLearner schools across the U.S. utilize standardized tests such as the Virginia Standards of Learning (SOLs), the Michigan Educational Assessment Program (MEAPs), the Standard Achievement Test 10th edition (SAT 10), the Iowa Test of Basic Skills (ITBS), and many others. Representative examples of standardized science testing in LabLearner schools from across the country are briefly summarized below.

Loudoun County Public Schools in Northern Virginia, with funding provided by the Howard Hughes Medical Institute, began incorporating LabLearner experiments into their curriculum in 2004. Prior to the implementation of the LabLearner program, Loudoun students scored in the mid- to high-90th percentile on Virginia’s Science Standards of Learning (SOL). In the nine years following the addition of the LabLearner program, Loudoun students continued to achieve consistently high SOL science scores (mid-high 90th percentile). Science supervisors within the district have indicated that not only is the LabLearner program an important component of the continued excellence of science scores on the SOLs, but it is also responsible for the increase in inquiry-based learning and experimental design seen in their students.

The Handley School in Saginaw, Michigan uses the MEAPs, the science assessments taken by all public schools in the state of Michigan, to evaluate the science proficiency of their students. In 2001, the Handley school adopted the LabLearner program. Scores from the 2004 MEAPs indicated that 67% of students at the Handley School scored as advanced in science whereas by 2008, 86% of students scored as advanced. In 2009 and 2010, the Handley School reported that 100% of its students met or exceeded levels of proficiency in science as compared to the state average of 78%. Finally, in 2017, with the LabLearner lab forming the base of the elementary science program, Handley School was awarded the National Blue Ribbon for excellence in education. 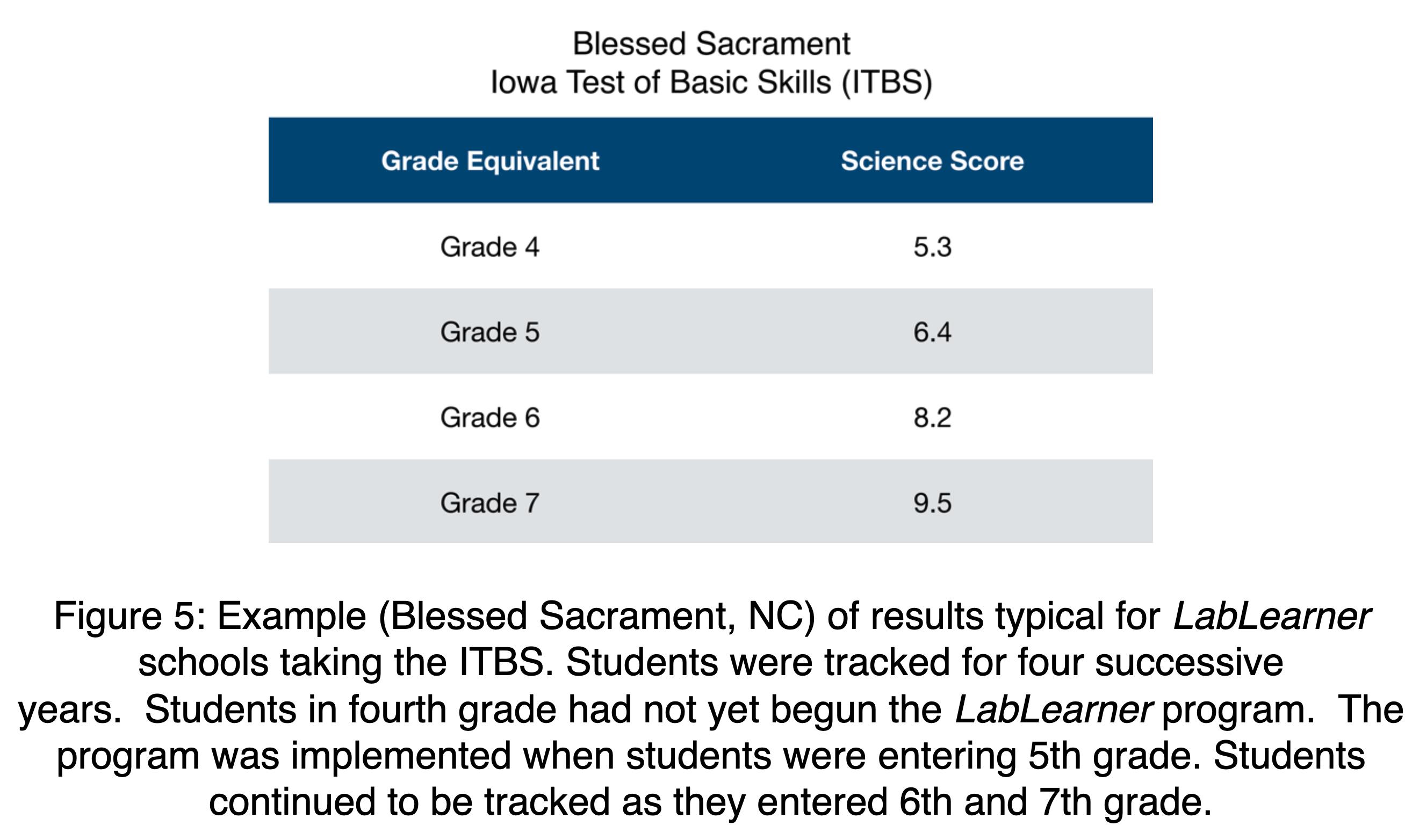 The Wood Acres School in Marietta, Georgia began implementing the LabLearner program in 2006. Wood Acres students score at 92% in the science Stanford Achievement Test (SAT 10), a test whose normed average is 50%. The Wood Acres School emphasizes that the LabLearner program provides a “science-math connection that is strong throughout the program and provides students with the tools to become independent researchers with problem-based projects.”

Blessed Sacrament School in Burlington, North Carolina began implementing the LabLearner program in 2006 as well. Blessed Sacrament assesses student-learning outcomes in all subject domains using the Iowa Tests of Basic Skills (ITBS). Blessed Sacrament consistently scores in the upper 20% nationally in Science. In 2012, for example, students achieved a National Percentile Rank of 83%. Figure 5 shows a longitudinal analysis of ITBS score improvement during the first three years of LabLearner implementation for a 4th-grade cohort. Notice that while improvements occurred during the first year of the program (5th grade versus 4th grade results), the greatest progress occurred after 3 years of LabLearner implementation (7th grade results). This is typical of LabLearner standardized test scores, likely as the result of the spiraling nature of the LabLearner curriculum.

The U.S. Department of Education National Blue Ribbon Award is one way to assess the academic impact of a curriculum or program. The Blue Ribbon is widely considered the “highest honor a school can achieve”. 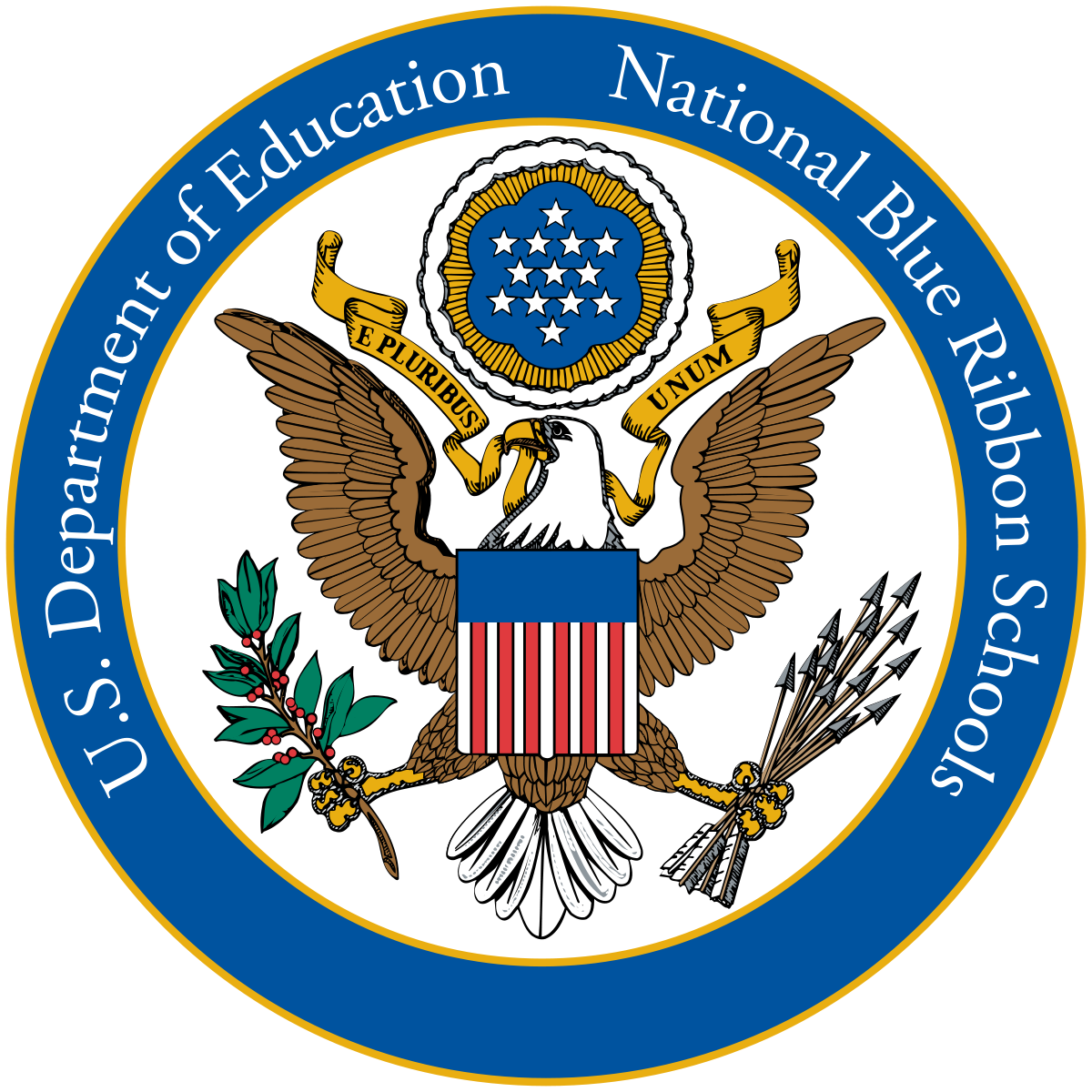 This is because the Blue Ribbon is not just a measure of minimal compliance or simple standardized test scores. It is a much more comprehensive assessment, involving a multiplicity of objective criteria that allows teachers, students, parents, and community representatives to assess the school’s strengths and weaknesses and develop strategic plans for the future. Based on such criteria, few schools that apply for the award even receive the mandatory site visit for Blue Ribbon consideration.

Roughly only between 2 – 4% of schools have been awarded a National Blue Ribbon since the program’s founding in 1982. However, nationally, approximately 20% of LabLearner schools have achieved the Blue Ribbon award – that is five to ten times the national average!

The PreK-8 LabLearner program consists of some 60-plus individual science units called Core Experience Learning Labs (CELLs). Each CELL takes approximately four or five weeks for a class to complete, working in teams of four to six students. In grades one through eight, students complete a pre-test, taken before the CELL begins and a post-test, taken at the end of the CELL.

Pre-/post-test assessments are fixed response evaluations where identical questions presented in an adjusted sequence are asked in both the pre-test and post-test documents. Questions on the pre-/post-tests reflect the science concepts taught within the investigations of a CELL. Questions require students to apply their knowledge of CELL concepts to new situations, interpret experimental results from a table, graph, or mathematical formula, and correlate experimental observations with scientific concepts. 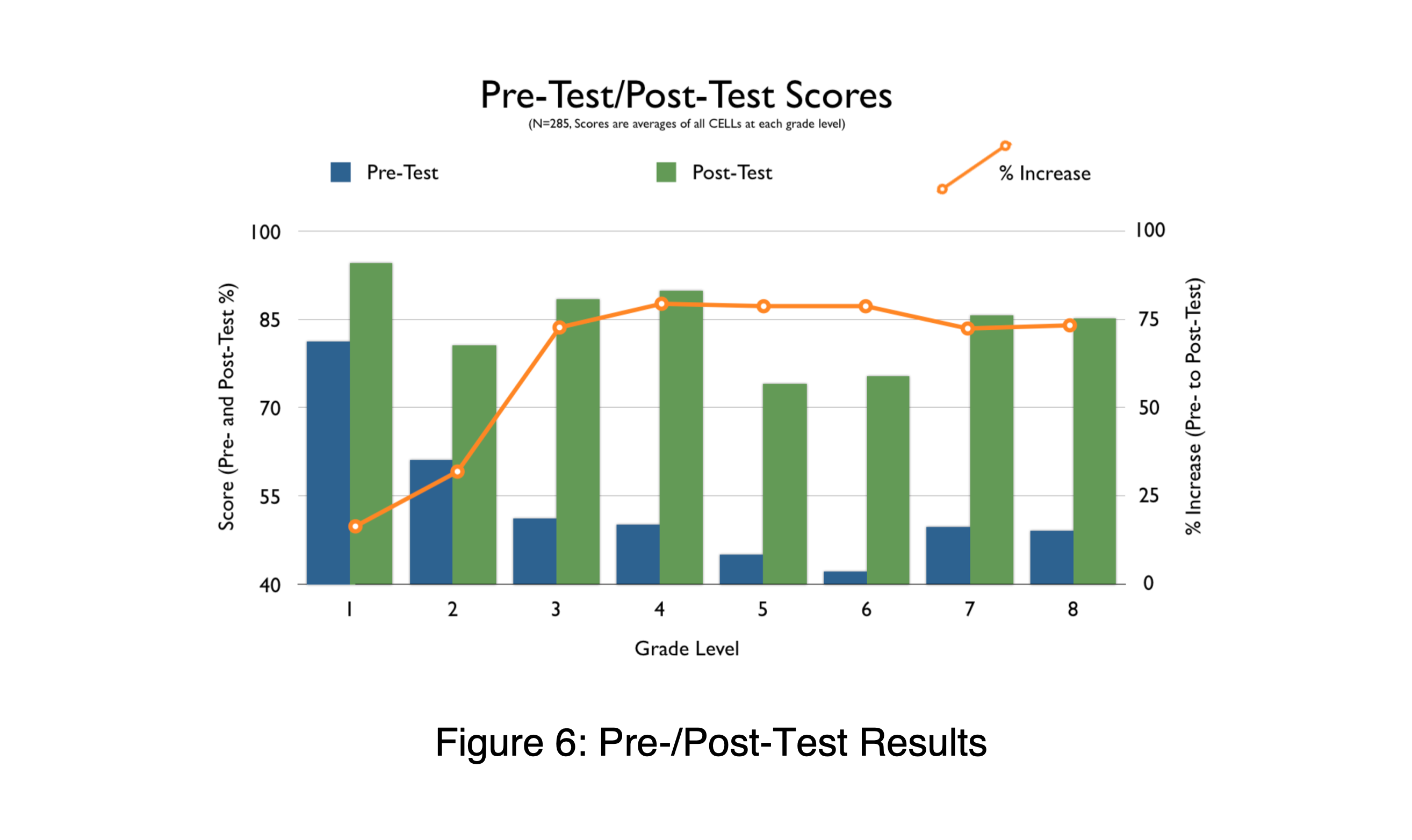 In a study conducted with 1,268 public school students from grades one through six, student performance from pre-test to post-test in grades one through six increased by an average of 40%. Comparison of pre- and post-test scores using the Student’s Paired t-test indicated that the improvement in students’ comprehension of science and math concepts taught in the CELLs was statistically significant (p<0.0001) for CELLs in all grade levels. In addition, analysis of the scores (p<0.05) suggested that there was no statistically significant difference in pre/post-test performance based on student gender or the specific teacher facilitating the CELLs. The LabLearner curriculum itself and the LabLearner approach, is clearly the major factor for these impressive increases in science performance.

The graphic shown in Figure 6 is indicative of similar studies. This study illustrates the increase in student LabLearner post-test performance in grades one through eight. In general, differences in student comprehension between pre- and post-test tend to increase as students move from primary to intermediate grades. The increase in performance is maintained through the middle school grades, a time in which U.S. schools tend to demonstrate a decrease in student science comprehension. These results are typical for LabLearner schools and illustrate the significant impact of the LabLearner program on student comprehension of scientific concepts. 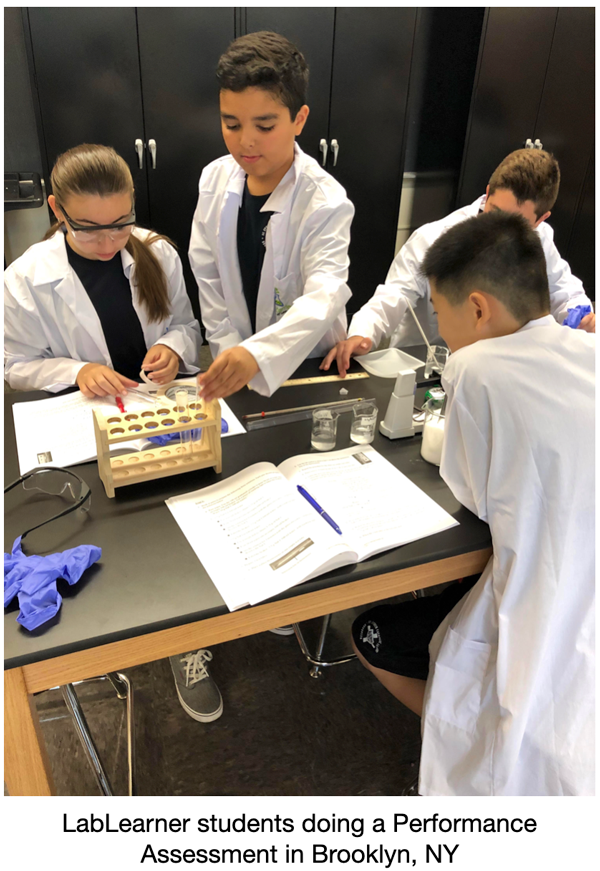 Finally, no pre-/post-test and certainly no standardized paper and pencil test can accurately evaluate scientific skill development and bench-side problem solving and critical thinking abilities. This is where LabLearner Performance Assessments come in.

The final Investigation of most LabLearner CELLs (units) typically consists of a performance assessment. A performance assessment is an authentic assessment in which cooperative lab groups that have worked through a complete CELL together are given a real-life problem to solve. The problem involves using tools, skills (including analytic techniques), scientific vocabulary, and science concepts previously used in the CELL. The performance assessments are typically presented as real-life issues one might encounter as part of an engineering job. For example, “Your boss wants you to recommend a metal that will be as lightweight as possible yet conduct heat well. Use what you have learned in this CELL to make a recommendation to your boss and provide your reasoning and data that led to your recommendation”.
By concluding each CELL of the multi-year spiraling LabLearner curriculum with a performance assessment, students receive repeated opportunities to apply scientific, mathematical, and technological skills to diverse engineering and other real-life problems. Consequently, specific engineering aspects of the LabLearner program can be used to smoothly and logically integrate larger-scale engineering projects into the STEM curriculum.

LabLearner Performance Assessments provide a direct mechanism to assess students in an authentic manner. Students are required to display not only an understanding of science content knowledge, but science skills and critical thinking as well. LabLearner provides rubrics and teacher professional development to easily grade performance assessments and help students to excel in scientific and critical thinking. During the PreK-8 LabLearner program, students have the opportunity to accomplish dozens of performance assessments across numerous science content areas and at all grade levels from third grade on.